Are you reaping the benefits of a stairlift? Do you have a curved or straight stairlift in your home?

How about an external stairlift to help you get up and down the steps in your garden?

If you have then you might be interested to learn all about the history of the stairlift and it’s very royal connections!

King Henry VIII and the Stairlift

Dr David Starkey, the famous historian, discovered amongst a list of the King’s possessions that King Henry VIII had installed a stairlift in the form of “a chair…that goeth up and down” to transport the King up the 20ft staircase at Whitehall Palace. Henry VIII was known to be obese but he also had difficulty getting about because of a jousting accident he had aged 45.

Dr Starkey believes that this first stairlift would have used a block and tackle system with servants using ropes to lift the monarch and his royal stairlift up and down the magnificent staircase.

The stairlift has come a long way since ropes and a pulley! The first stairlift that we would recognize today was invented in the 1920s by C.C. Crispen who wanted to help his sick friend get up and down the stairs. He called his invention the inclinator. By the 1930s the Inclinator Company of America had been established and was mainly used by victims of polio.

These stairlifts were more in keeping with what we see today, consisting of a folding chair and footrest which moved with the aid of rollers up and down a track fastened to the stairs. This system has been found to be so effective that the design has hardly changed much over the years. 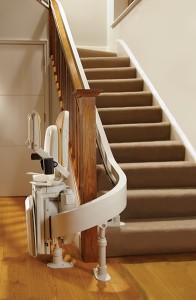 This simple device for transporting people up and down stairs has become so popular, thanks to the independence it gives, that many companies now offer a wide range of stairlifts such as:

Curved stairlifts: for staircases which curve round.

Outdoor stairlifts: as some properties have outdoor steps either to get into the building or in the garden. Acorn stairlifts was established in 1992 and they developed the most modern stairlift yet, the Acorn Superglide 120. 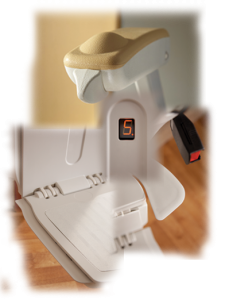 Even King Henry VIII would have been impressed with the number of features now available on the modern stairlift. The folding seat and footrest haven’t changed since Crispin but now you can control the stairlift via wireless remote control which is handy if you have more than one person using it; safety features, swivel seats and user-friendly controls.

We’re not sure what the cost of King Henry’s stair-throne was but the price of stairlifts is now very competitive with many people benefiting from refurbished stairlifts that have been used but which have benefitted from stairlift servicing so that its condition is as good as new. And if you only need a stairlift for a short while, for a period of recuperation for instance, then some companies also offer stairlift rental. So from royal beginnings the humble stairlift has been changing the lives of people for generations and will continue to do so whilst staying true to the very first prototype that proved such a success for Crispin.